We’ve all heard these terms, and many of us have suffered from this condition. But what about “Dark Disc Disease”? What does it mean to have a “Leaky Disc”?

Intervertebral Discs are the spacers between the bones in or spine.

In their normal state they function as perfect little shock absorbers —allowing us to bend, twist, jump and run effortlessly. As we age (and by age I mean become older than 17) our discs can become prone to degeneration and injury. A great day on the playing field, tennis court, or golf course can be suddenly cut short by intense back pain, or even worse, shooting pain into the leg. This is usually the result of a disc “bulging” or “herniating” from its normal position within the confines of the circular disc to the outside layer of the disc or beyond —causing pressure on the adjacent nerve, resulting in severe back pain or sciatica. Typically symptoms will resolve with rest, ice, NSAIDS and time. If they don’t — or if symptoms are really severe — an MRI is often ordered to help determine where the injury has occurred.

But what if the MRI comes back “normal”? What??? How can an MRI be “normal” if someone is having such terrible pain? This is the story of the Mystery of the Leaking Disc.

Let’s look a little closer at the intervertebral disc.

It’s actually more like a jelly doughnut than a washer. The outside of the doughnut, the “annulus fibrosus” is a tough rubbery fiber and the inside, the “nucleus pulposus” is a thick gummy jelly. No, not as delicious-sounding as a Krispy Kreme, but much better suited for its job within the spine. Unfortunately for us, the ingredient list for the disc jelly includes some not-so-friendly-sounding substances such as Thromboxane A2, Leukotriene B4, and yes, even the dreaded Tumor Necrosis Factor! As nasty as they sound, these naturally occurring chemicals usually don’t bother anyone — as long as they stay INSIDE the disc…

Let’s take another look at that “normal” MRI. Did the REPORT say normal, or did the treating physician actually LOOK AT THE PICTURES?

Check out the example below. This report was read as “normal.” 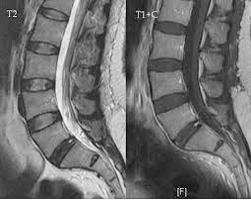 However if you look at the side view, especially in the picture on the left labeled “T2”, you can see that one of the discs look different. Can you see that disc at the very bottom is darker than all of the discs above it? This is what is referred to as a “dark disc” — one that has lost its normal water content. Not really that mysterious actually; more like “overlooked” or “ignored”. Taking an even closer look, you can see that there is a tiny white spot at the very back of the disc. This is what’s called a “high intensity zone” or “HIZ” — and suggests the presence of a TEAR in the outer layer of the disc. As you can see, this MRI is turning out to be anything BUT normal…

Here’s what’s gong on when that jelly starts leaking from the nucleus into the annulus, or worse — onto the surrounding nerves: 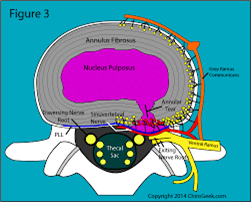 • The purple stuff (nucleus pulposus jelly — we’ll call it NPJ —containing all of the inflammatory chemicals) leaks into places where its not supposed to be, like the annulus and surrounding nerves.
• NPJ starts an inflammatory chain reaction, leading to further breakdown of the damaged/torn disc
• NPJ causes all of the surrounding nerve fibers to be super-irritated. This can be so severe that a person may suffer from sciatica going all the way down the leg — even though there is no bulging disc! I tell patients its kind of like cutting jalapeños and then rubbing your eye. The eyeball is not scratched or damaged, but it sure as heck hurts! Well imagine if you kept rubbing your eye with that nasty jalapeño finger of yours — your eye would never stop hurting. That’s exactly what is happening when you have a leaking or torn disc. The chemical irritation never stops.
• Over time, NPJ-induced inflammation leads to the abnormal ingrowth of angry blood vessels and nerve fibers into the damaged portion of the disc. This highly dysfunctional state is known as the “chemically-sensitized” disc, and is characterized by severe pain occurring with simple activities such as rolling over in bed, putting on socks, and getting up from a chair. Running? Cutting? Twisting? Forget about it!

As you can see, it is very important that a treating physician actually LOOKS AT the pictures on the MRI. Why? Because often times “Dark Disc Disease” (DDD) and “Leaky Disc Syndrome” (LDS) can be treated.

• By the way, in case you were wondering, you can think of DDD and LDS as being pretty much the same thing — with differing degrees of severity.
• Oh, also, you can put your MRI CD-ROM into your computer and just start clicking away randomly on the buttons until the images appear. You won’t hurt it. And MAKE SURE YOU DON’T LEAVE THE MRI PLACE WITHOUT A CD-ROM!!! You’re paying a pretty penny for that study!
• And no, they don’t send us the pictures— only the report!
Until about 15 years ago we really didn’t have many good treatments options for DDD/LDS. In fact, we would sometimes tell patients that one of the benefits of getting older was that painful discs would typically become LESS painful over time. How much time? DECADES! Ugh…

Thankfully, as research progressed, physician-scientists began looking differently at the intervertebral discs, and began using novel techniques such as heat and electricity to “zap” some of the abnormal nerve and blood vessel tissue in the discs. For a while, these techniques (such as IDET, Nucleoplasty, and Dekompressor) were used successfully — until insurance companies decided that the devices were too “experimental” — and decided to stop paying for them.

The basic idea behind using platelets to treat DDD/LDS is that the ANTI-inflammatory chemicals found naturally inside platelets can be used —in a highly concentrated form created by centrifugation — to neutralize the PRO-inflammatory chemicals from the NPJ we talked about earlier. Putting a bunch of PRP into an injured disc is like letting 10,000 ladybugs loose on a bunch of sickly plants covered with aphids! Once the ladybugs have done their job, they simply fly away and the once-sickly plant can get back to healthy living. You can think about your platelets as being cute, extremely helpful little lady bugs, unless lady bugs scare you. If that’s the case, please just think of them as platelets and ignore the analogy.

Stem cells take it even one step further, offering the promise of new healthy tissue formation at the site of a chronic disc injury. Additionally, the ANTI-inflammatory chemicals found in BMC can often times be even more potent than those found in PRP.

There is still a lot of ongoing debate about what the “best practices” are when it comes to treating DDD/LDS. Do we inject PRP? BMC? Into the nucleus? The annulus? How much? These are answers that may not become fully clear for another 5-10 years.

What is known about orthobiologic procedures for DDD/LDS is that — in the hands of experienced physicians who are up to date on the latest techniques and literature—the process is very safe. The risk of infection or worsening of the condition is very low, and the procedure has been done many thousands of times over the past ten years in the US and throughout the world.

So as we come to the end of this story, you can see that the Mystery of the Leaking Disc isn’t so mysterious after all. All it takes is a CD-ROM, a computer, and a little curiosity to begin finding important clues to your own “Leaking Disc” mystery — clues that will put you on the path to recovery.